Cyrellys Geibhendach.  Hidden in the NDAA Section 3003 is the Oak Flat Land Exchange on page 1103; intent is to hand it over to a corporation for mining.  This is protected Apache sacred land, recreational land (rock climbing & camping), and wildlife.
And guess who is behind it?  That’s right John McCain. Mr Deep State, lets put neo-nazis in charge of Ukraine and then blame ‘er rename civil war “invasion”, all on Russia meanwhile making public statements on Cheney and the torture report in Congress.
Quote:  The NDAA is just the gift that keeps on giving, isn’t it? Prior to vote, the House and Senate Arms Services Committee attached a provision to the NDAA that would transfer the Apache people’s ancestral lands in the Tonto National Forest to a corporation called Resolution copper, which is a subsidiary of Rio Tinto, which as an Australian-English mining company. Senator John McCain, the senior Republican Senator from Arizona headed the push for this provision to be included.
Read more at http://higherperspective.com/2014/12/ndaa-apache.html#Oy2u4yBUm5rM5zai.99
Quote:  New Oak Flat land exchange language analysis
Section 3003 of the National Defense Authorization Act
On December 4, 2014, the US House of Representatives voted to approve the National Defense Authorization Act (NDAA). Buried deep within the 1,600 pages bill (on page 1103 as Section 3003) was the Oak Flat land exchange.
Quote:  [BREAKING]: The true reason behind the “swap”  Why does the company need the land exchange now, rather than waiting until the feasibility study has been completed?In order for Resolution Copper to complete our feasibility and make a final decision about how to develop the mine, we need access to an approximately 760-acre tract that includes the Oak Flat campground. An executive order precludes the company from drilling exploratory holes on or under the Oak Flat campground while it is under public ownership. Information collected from the drilling will provide the company with data necessary to decide whether and how the mine will be constructed.  http://resolutioncopper.com/faq/#why-does-the-company-need-th…

Quote:  S. 339 is a land exchange that foreign-owned Rio Tinto mining company has convinced Arizona members of Congress to introduce on their behalf, a giveaway of land that is sacred to the San Carlos Apache tribe. The bill would be the only bill in Congress that would give away a sacred site to a foreign corporation, would be the largest loss of recreational climbing on public lands, and would overturn a ban on mining at Oak Flat that was put in place by President Eisenhower.
Quote:  BIG PROBLEM: Ann Kirkpatrick (DEMOCRAT) IS A CO-SPONSOR and has been from Day One!!! This Democrat should also have her head reshaped since she’s ALL FOR IT!! Also, reshape McCain’s RINO head too since he’s all for it and the Senator from AZ. This land is not part of the San Carlos Reservation, but taken from Apaches many years ago and now part of the U.S. Forest Service not the reservation. Still, this is a bad idea, but get your facts straight here will ya?? An Arizona Democrat is a co-sponsor and she lives there.  ~ ChiTownGirl 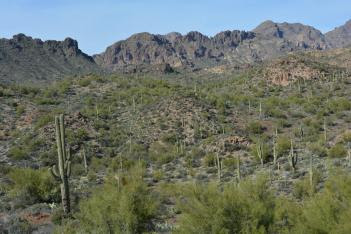 Rio Tinto Proposed Tailings LocationThe Arizona Mining Reform Coalition filed comments today to the US Forest Service (Tonto National Forest) on Rio Tinto’s invasive testing plan for their proposed tailings location near Oak Flat.  According to Rio Tinto’s current plans, this is the only location they are actively considering for dumping a Picket Post sized mountain of toxic tailings should they be allowed to mine under Oak Flat. 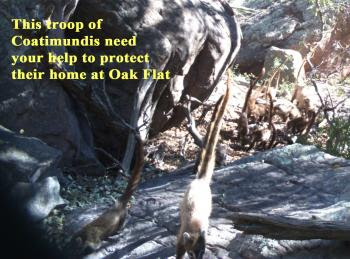 Rio Tinto’s supporters changed the language of the Oak Flat land exchange in an attempt to make it more palatable fortheir colleagues and to curry additional support when they attached it as a rider to the  National Defense Authorization Act.  The Oak Flat land exchange is buried the defense bill (Page 1103 of the 1,600 page bill) as section 3003.  The bill has passed the House of Represenatives, but has not yet come up for a vote in the Senate.

Cyrellys:
Quote from “Tragedy & Hope” by Carroll Quiqley (1966) page 215:  “Prosperous enterprises like the Suez Canal Company, the Rothschild copper enterprise, Rio Tinto, in Spain, and many newer joint activities in Morocco created numerous unobtrusive links which both preceded and strengthened the Triple Entente.”
I also read in one of my many books that described future U.S. President, Herbert Hoover, receiving his Mining Engineering degree and taking his first job in the employ of Rio Tinto, a Rothschild enterprise in Australia.  Now do you see why we would give away valuable land in our country to a company like Rio Tinto ?  The Rothschilds own a great deal of the Federal Reserve and also helped found the Council on Foreign Relations (CFR) in the Pratt Building in New York City.  Most of our Presidents and their Cabinet Members have at one time been members of the CFR !
One more little tidbit of information I learned many years ago.  I have a copy of an agreement reached between then President Ronald Reagan and the Soviet Government to merge our two countries’ Scientific, Technical, Educational, Cultural, and Other Fields.  This agreement was signed in Geneva, Switzerland on 21 November 1985.  The signature on the Agreement was signed by U. S. Secretary of State George P. Shultz and his Soviet counterpart.  Guess what the “P” stands for in Sec. Shultz’ middle name ?  Pratt !  His family donated the Pratt House as the Home for the new organization known as The Council on Foreign Relations !  Nuff sed ?
BB